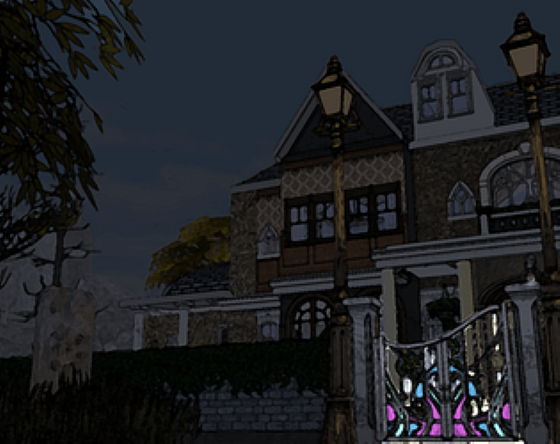 Your friend and their family died in a fire that burnt down their home. Some time later you received a mail from your friend, with a key to their front gate. Their house should be nothing but ashes by now, but when you visited, it stood perfectly intact.

You unlocked the gate and entered.

The Silver Key was a Lovecraftian point-and-click adventure created in a week for Scream Jam Halloween 2019. The game was created in Unity, with art assets created from filtering screenshots of a mansion from The Sims 4.

Scream Jam runs regular game jams on itch.io with horror theme. Therefore it has the largest traction during the month of October, to celebrate Halloween season.

The idea of this point-and-click interactive novel was to have the player navigating through complete darkness, in order to find clues about Kyle and his family. Each room / scene has two layers - the image of the room and pitch black darkness on top. A circle transparent mask that follows mouse cursor would clip through the black layer, acting as a torchlight for the player to see around the room.

It was my very first game jam ever, and even though it had a generous time frame of a week, I found myself racing against the deadline through these beginner challenges:

Detecting collision - The rooms / scenes are just static images, with objects of interest being part of the image. My solution for the interactable objects was to make a separate collision game object, with a highlight sprite that matches the size of an “interactable”. For example, when the player clicks on a lamp, they are clicking on the collision highlight of the lamp, rather than the image of the lamp itself.

Creating UI and menus - Unity handles UI in its own system, with its own coordinates, object types and event triggers that are different from ordinary game objects such as sprites. This caused a lot of confusion during the making of The Silver Key - a UI heavy game rather than a sprite-based game. I had to make clear separation between the interactable objects in a scene - which are sprites - and the UI elements like the inventory on top left and the dialogue at the bottom.

It was also easy to misjudge the sizes of UI elements due to the coordination system - game objects would use world coordinates, while UI elements use screen resolution. Frequent testing was needed to ensure the UI elements were not too big or too small due to this confusion.

Building the game for different resolutions and platforms - Speaking of screen resolution, depending on what configuration has been used for the game objects and UI elements, they could either clip, scale or resize incorrectly, if the game was built for flexible resolution. I had designed The Silver Key with 16:9 screen ratio in mind, and the game would at least be able to scale correctly in this ratio.

Another challenge that nearly pushed me past the deadline of the game jam was my choice of platform. Being a small scale game, I intended this to be playable straight from the web browser. However Unity took a lot longer to build the game for the web than a Windows executable.

It was the moment when I realised that there is more work to game development than just writing a good story, even with an interactive novel like this.

Play from browser on itch.io: https://rosareven.itch.io/the-silver-key